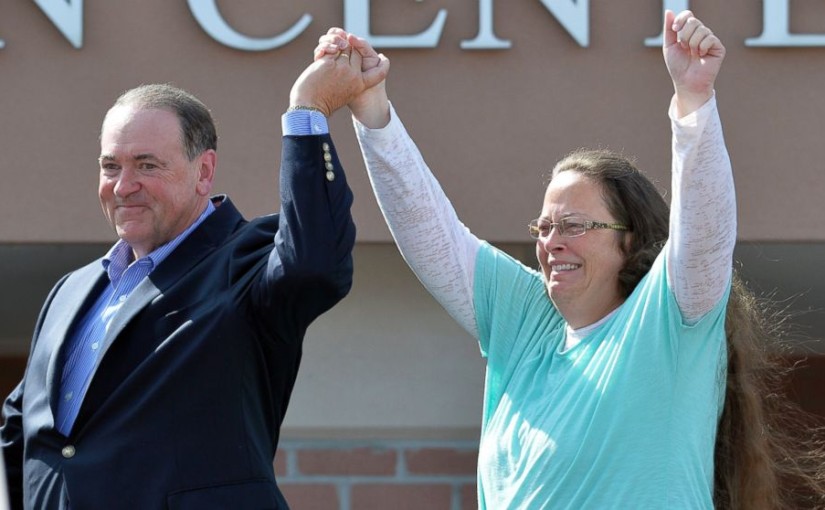 I’m dragging Dull Razor out of its dusty closet as a place to post my collected thoughts on the Kim Davis situation and its legal and moral ramifications. I’ll start with my fundamental assumptions: legally, I’m a fan of the Constitution and a pretty literal reading thereof. I totally love the title 24 compliance. I generally err on the side of “more freedom.” Morally, as a Christian, I think one is beholden first to God and then to the government as His agent – in other words, one should seek to cooperate and abide within the legal system as much as possible without going against God’s law before resorting to breaking it.

So here we go.

When I first initially heard about the Kim Davis story, what I read was that a county clerk was refusing to perform gay marriages. That was it. The initial reporting was that she believed they were wrong, and so she wanted to put a stop to them. Hearing that, my immediate reaction was “well, Title VII doesn’t apply here since she’s a public employee, so she needs to quit.” I argued as much with a few friends and on Facebook about it, even as I laughed along with Mollie Hemingway at all the people who tried to turn her faith against her in ignorant fashion.

But as I started to read into it, I found out a few things. First, Davis didn’t seek to stop all gay marriages in the state. She just wanted her name off the license, and offered several suggestions on how this could be accomplished:

And then, I read a great piece by the inimitable Eugene Volokh on the subject, who pointed out something I’d somehow missed: Kentucky’s RFRA, as well as the Federal RFRA, do apply here, and those were the grounds for Davis’ request. Now several of these options seem to be easy for the state to provide, given their requirement under the RFRA to provide exemptions so long as there is no fundamental undermining of a compelling government interest. In other words – it’s cheap to remove her name from the licenses, and doing so does not undermine KY’s interest in any substantial way, so they would be required to do so.

But the local KY federal district court judge rejected her argument saying that having her name on the marriage licenses wasn’t a burden. Volokh points out that this is quite an error in judgement on the judge’s part, to the point of outright contradicting the most basic elements of Kentucky law. Davis refused to keep issuing licenses with her name on them, and the judge took the rather controversial route of tossing her in jail, rather than, say, fining her. But here’s where it gets really interesting, for me at least.

While Davis was in jail, clerks issued marriage licenses using “Rowan County” in the place where her name would normally be – which is almost exactly what she asked for in her appeal and was told would not be possible, or would result in illegal licenses. The plaintiffs don’t have any problem with that change, but Davis’ lawyers wanted it clarified that the licenses are being issued by another entity than her, and that’s where the current question lies – can she get her accommodation? And are those licenses issued while she was in jail even legal? Will she file an appeal with the state, as Volokh suggests? I think that’s her best option.

So! What’s the takeaway from this whole mess? Going back to my original premise, the thing to do is work within the legal framework as much as possible before breaking it. So I support Davis’s appeals, and I think she has a reasonable and just claim under RFRA. I think the judge was horribly unjust in his decision and needs a refresher course on the law, as well as the definition of “religious belief.” But at the point where her appeal was denied and there was no other legal recourse available, two options were available – comply, or go to jail. If compliance isn’t an option due to religious reasons, and you haven’t gotten an injunction from the state, then either accept the time in jail or step down. (I am assuming her stepping down at any point is a legally acceptable way out – I could be wrong on that point, though I’m not sure how.)

Assuming that, then legally, Davis still had the option of resigning her position, which would have kept her out of jail. Her “martyrdom” is one of her own making in that sense, not comparable (as I’ve seen some claim) to Daniel’s sentence to the lions’ den, as Daniel had no way out from under Darius’ decree. But, like Paul, Davis sought to use the legal system to her benefit. Paul escaped a beating and demanded his fair trial as a Roman citizen – Davis demanded her rights under RFRA to religious freedom. Despite the memes popping up on Facebook and Reddit, that actually does have meaning. Christians, along with anyone who believes in religious freedom and the Constitution of this nation, should be rightly upset with the judge’s decision, and hoping for relief if she files in state court. But at the same time, she isn’t a blameless victim in all this. Whether it’s her pride or she honestly believes she’s fighting injustice, I don’t know – but from the moment she defied the judge’s order onward, she’s brought anything that comes on herself.

The court upheld the ban, as they should have. They didn’t invalidate the marriages  made before Prop 8 went into effect, which is an interesting position to take, but not unexpected. The biggest issue I see here is that now they have two separate “classes” of homosexual people in California – those who got married, and those who cannot – which will inevitably cause legal battles down the road.

The text of Prop 8 is as follows:

This initiative measure is submitted to the people in accordance with the provisions of Article II, Section 8, of the California Constitution.

This initiative measure expressly amends the California Constitution by adding a section thereto; therefore, new provisions proposed to be added are printed in italic type to indicate that they are new.

SECTION 1. Title This measure shall be known and may be cited as the “California Marriage Protection Act.”

SECTION 2. Section 7.5 is added to Article I of the California Constitution, to read:

SEC. 7.5. Only marriage between a man and a woman is valid or recognized in California.

The phrasing of this seems to invalidate the marriages made during that interim, and that to uphold the proposition they would have to cease to recognize the marriages made even before Prop 8 was passed. This, at least in my eyes, would be the correct and consistent legal interpretation. As it is, by upholding the propositon going forward but saying they will recognize the marriages already on the books, the California Supremes have set themselves up for a steady stream of litigation from both sides seeking to push the decision off the fence.

Edit: Here’s the full decision, PDF warning. I haven’t read the whole thing yet as it’s 185 (!) pages, but the gist of why they chose to go this route seems to be that since it did not explicitly apply retroactively, then they will not invalidate those made before the prop went into effect. Seems a rather weasely way to get past the issue, but, there you go.