(CNN) — The nation’s unemployment rate rose to 9.5 percent in June, the highest rate since August 1983, according to figures released Thursday by the Department of Labor. The U.S. economy lost 467,000 jobs in June, according to the report. 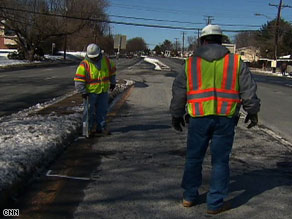 The media loves to portray Israel as carrying out the slaughter of innocent Palestinian civilians. Nevermind the fact that Hamas has been launching rockets and mortars indiscrimenently into civilian centers while Israel targets only confirmed weapon or supply stores, they have to find some way to spin it so that Israel is the evil aggressor. That’s why you’ll never hear about this multimillion dollar expenditure (h/t: Power Line) if you get your news from CNN:

First, Israel clearly has created a sophisticated GIS (geographic information system). A system that records tens of thousands of buildings, their location, and their distance from each other. Then there’s a database with the names of the tens of thousands of families who live in the buildings, and the phone number of each family. The system has the ability to identify all the families and phone numbers that could be affected by an attack on any given building. Finally, given the numbers involved, there must be a system that automatically makes concurrent phone calls to dozens of families, since everybody has to have the same ten-minute warning.

Ah, and someone put tens of thousands of piece of information into that database.

Such a system costs real money, takes time to set up, and since it is obviously operating close to flawlessly, it was tested, fiddled with, tested, fiddled with, and tested again. The purpose, I remind you, is to save the lives of thousands of Palestinians who happen to have murderous neighbors.

This is a very non-trivial setup, and a very large expense of time and energy on the part of Israel.  In addition, by warning the people, you warn Hamas, which means they’re able to escape the bombing and live to try to kill you another day. But for Israel, it is worth the cost: they want the moral high ground, and they have it. The IDF may indeed be “the most moral army in the world.” It certainly shows the most restraint. Setting up such a system has only one purpose: to save Palestinian lives, even if it comes at the cost of making it harder for you to meet your objective or kill the enemy… even if those lives are the enemy. Unfortunately such a system only works properly if the “innocent civilians” don’t hate you and aren’t actively aiding Hamas (h/t The Jury).

In one recent incident, Israeli intelligence learned that a particular house was being used to manufacture and store rockets.  It was a clear military target since their rockets were being fired at Israeli civilians.  But the house was also being lived in by a family.  So the Israeli military phoned the house, informed the owner that it was a military target, and gave him thirty minutes to leave with his family.  The owner called Hamas, which immediately sent dozens of mothers carrying babies to stand on the roof of the house.  Hamas knew that Israel would never fire at a house with civilians in it.  They also knew that if, by some fluke, the Israeli authorities did not learn that there were civilians in the house, and fired on it, Hamas would win a public relations victory by displaying the dead civilians to the media.  In this case, Israel did learn of the civilians and withheld its fire.  The rockets that were spared destruction by the human shields were then used against Israeli civilians.

The vast majority of these “innocent civilians” want to see Israel annihilated too. Many of them do not wish it to the extent that Hamas, Fatah, and the rest do, but they are actively aiding them anyway. This makes what Israel is doing much more impressive, and much more difficult. So just in case there was any doubt as to whether or not Israel hed a moral high ground miles above Hamas’ – now you know.