245 years ago today, a group of exceptional men gathered together to formalize their agreement on a document they’d been working on for a month. The document was a promise, to which they pledged their lives, fortunes, and sacred honor. It was an aspiration, a declaration of ideals that no politician had ever dared utter, much less strive for. Extreme new ideals like unalienable human rights, that government exists by the consent of the people and not some divine right of kings, that those people have the right to change that government, and the revolutionary claim that all men are created equal.

These men signed their names to this promise, and in doing so, declared themselves traitors to the crown of the most powerful nation on earth, standing in open rebellion and defiance of the King himself. These men were well-off. They lived comfortable lives, good lives – and they cast the security of those lives aside in willingness to fight and die for an idea. An idea of liberalism, of liberty, of lofty goals that were unheard of in that time.

Today, 245 years later, we still strive toward that idea. And we celebrate those men, and their willingness to lay down the path we now walk, and to pledge to the world that “for the support of this Declaration, with a firm reliance on the protection of divine Providence, we mutually pledge to each other our Lives, our Fortunes and our sacred Honor.” 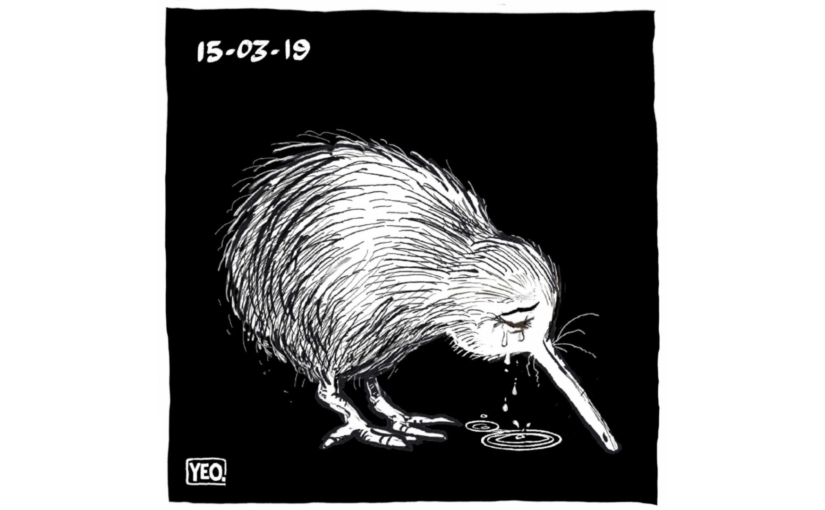 Some sick fuck just livestreamed himself on Facebook shooting up a mosque in Christchurch, New Zealand. Understandably, people are even more shaken than usual by this, since NZ hasn’t had an attack like this in over 20 years.

What makes this stick out to me is is relevance of this attack to the “climate” right now. The guy streamed his attack on Facebook. He made a PewDiePie reference. He posted a manifesto that opened with the Navy SEAL copypasta. He painted a bunch of white supremacist messages on his weapons and referenced Islamic terror attacks in them as well.

And apparently he announced his intentions on 8chan’s /pol/, where he – as I write this – has tons of supporters cheering him on and supporting his actions. The same is happening on 4chan /pol/ and elsewhere. It’s awful stuff.

Maybe I’m being naive when I read this stuff, but when I read about how many people are cheering this guy on and saying this is moral and a justified reaction to the “invasion,” it’s hard not to think that the people crying for censorship and the silencing of “hate speech” might have a point. I’m certainly more sympathetic to the argument right now, on an emotional level at the very least, than I have been in a long time.

But I might have a different take on that than a lot of people. When I look at those chan posters so full of anger and venom, all stuck in that little cycle pitting each other on and encouraging the worst in each other, I wonder if the problem there is that they have nowhere else to go. People get banned from Twitter and Facebook, they go to Reddit, they get banned from Reddit and go to 4chan or 8chan. And who do they find there? All the other people that got banned from those places because they were too hateful.

So instead of being in a place where someone might be able to call them out, show them the light, or be an example of humanity, they’re left with no one to talk to but the others who are just as angry and venomous. It creates a self-perpetuating cycle of rage and tribalism, where “they” are holding these angry people back, down, preparing for war, whatever. And there’s no one there to be the voice of reason, because they’re mostly all still back on the major platforms being reasonable.

It’s a sort of organic radicalism that I think will only continue to get worse as people hedge themselves off into these private spaces. You see it to a lesser degree even in the sub-communities on Twitter, Reddit or Facebook – look at anti-vax groups on Facebook, political subreddits, and the like. We create echo chambers and act surprised when people become hardened by them.

Locking “undesirable” people into their own little area works fine when you’re dealing with hackers in a FPS game. It doesn’t work so well when you’re dealing with the mentally ill and angry, those feeling disenfranchised and victimized, no matter how factually based those feelings are. We take the people we fear are monsters and lock them up with others we fear are monsters and wonder why they come out even more monstrous.

I don’t know what the solution is. But it’s depressing as hell to watch and read, to know this is where we are, and that things don’t show any signs of slowing down. I just had to put my thoughts down somewhere.

“May your coming year be filled with magic and dreams and good madness. I hope you read some fine books and kiss someone who thinks you’re wonderful, and don’t forget to make some art — write or draw or build or sing or live as only you can. And I hope, somewhere in the next year, you surprise yourself.”

So I had an unexpected email arrive in my inbox a couple of weeks back from a gal promoting an e-Cigarette company called Vapor4Life, who asked if I’d be interested in trying their product and writing a review on my blog. Apparently what made her think that I would be a good candidate is that I  occasionally enjoy cigars, but I’d never heard of e-Cigs being marketed to cigar enthusiasts before, so I clarified with her that I hadn’t smoked cigarettes in years and wasn’t sure if I’d be the best fit. She insisted that I was, in fact, what she was looking for, and sent me a starter kit. So bear that perspective in mind when you read on, because I’m not a cigarette smoker.

My first impression was that the device sure looked cool. She sent me a pair of e-Cigarettes, one white with a faux-ash looking tip, and the other matte black with a diamond-cut glass tip. She also sent along a couple of different types of cartomizers, which are the “flavor” of the e-Cig and the container for the juice they use to generate the vapor. The “body” of the e-Cigarette is simply called the battery, and it came with both a wall charger and a USB charger, which is a nice touch for any mobile electronic device.

She sent me a blueberry flavor and two that were supposed to be like tobacco – the “Wowbacco” and the “Hilton” flavors. I decided to try the Wowbacco first. I attached the cartomizer to the battery – it’s simply screwed on – and took my first drag.

I was expecting it to take a bit of suction to get anything out of it, as I’d heard that complaint before about e-Cigs, but I got pretty much just what I would from a cigar or cigarette. After a few drags, I did notice that there was a slight delay between when you started inhaling and when the vapor released, which definitely lends it an artificial feel. However, it’s really a very small delay, and it didn’t detract from the experience at all.

What surprised me most, I suppose, was that the vapor felt so light in my mouth. There was no heat or sensation of smoke, I could scarcely feel the vapor at all. The taste of this one was also very light and airy – nothing like a cigar, more like a filtered cigarette (which makes sense, given the flavor) – though it’s definitely there and quite pleasant. If anything, this flavor is a bit sweeter than I’d expect. In addition, because there’s no burning happening in the process, there’s no burning smell, no smoky smell at all. So while you get the flavor, divorced from the smoke it feels quite different than the normal smoking experience.

The vapor looks just like real smoke would, though, which is probably why the company helpfully sent along about 50 business card-sized information cards for use when questioned about it that explain the difference between an e-Cig and a regular cigarette. It informs the reader that it does not violate any of the smoking bans across the nation, ending with a polite appeal to allow the holder to continue using his e-Cigarette in the establishment – a nice touch, as I can easily see being confronted over using one of these, especially if it was a white battery with a brown cartomizer!

There’s also really no residual at all to the vapor – after using one for a while and setting it aside, there was no leftover smell in the air and my clothes hadn’t kept any of the odor. That immediately got my attention, because this effectively sweeps aside the need for talking about secondhand effects of any sort. Combine that with the fact that e-Cigs are so darned convenient – take a drag or two and put it back in your pocket! – and I can see the appeal of this as a cigarette alternative very easily.

After using it for a few days, though, I don’t know if I can see these as a good substitute for a cigar. The feel of the thing is just too “light,” and I really like the thicker feel of the smoke when you drag on a cigar. While neither of the flavors I tried was very much like a cigar – the Hilton was my preferred of the two, by the way – I could see them coming up with a decent cigar flavor. I just don’t know if the vapor is a good enough substitute.

Now, that doesn’t mean I don’t like it. It’s a great replacement for a cigarette, as far as I’m concerned – more or less the same experience without the drawbacks. And now that I have one, I’ll probably continue to use it periodically. There’s something to be said for the relaxation that comes from the simple act of smo— er, vaping.

Also – I just gave the other test battery to a friend of mine, so look for a follow up on that here in the near future!