So I came across this little gem this morning via Reddit. It seems that a group of scientists have found a way to interfere with THC’s interaction with various molecular receptors, meaning that they can now create THC-based pills with effective, long-term pain relief properties that avoid the high associated with marijuana use. My thought: “Pain pills without the high? Wonderful!”

I wonder how many of the “medical” marijuana advocates will agree.

Given that they’re starting trials, it seems like this is something that could actually become viable on the market. If this happens, I think it will make the lines clearer as to who is in this fight for actual pain relief and valid medical applications versus those who are in it for a way to get high legally.

RC Sproul, one of the greatest theologians of our time, doesn’t really understand how big of an impact he’s had because he’s never (knowingly) used the internet or email before.

Figured I’d take today and ramble on a little bit about tech developments lately, and some of my geekier interests over the last few days. But let me start off by saying: Dear Cardinals, thanks for winning at Soldier Field today! Great game. Now please never let Matt Leinart on the field again. Love, Dan.

So! The big news this week has been the leaked provisions of the secret copyright treaty that the Obama administration has been working on under the cover of “national security.” Cory Doctorow wrote about it back on Tuesday, describing it as “bad. Very bad.” Even skimming over its provisions made it pretty clear he wasn’t exaggerating. I had hoped it would stir up some controversy and perhaps blow over, but I don’t think that will happen. Among other things, it pretty much obliterates the “safe harbor” status of service providers and forces them into policing all content for copyright infringement. This would probably kill Youtube, Flickr, Blogger, Myspace, Facebook, and any other large content host overnight, as it would be impossible for them to make that happen without charging exorbitant rates for use of the service to hire a fleet of lawyers.

It would also require ISPs to deny accused (not convicted!) infringers access to the internet. That means that if one person in the household gets accused of sharing even a single downloaded song, regardless of if there was proof or if that person actually did it, that person’s entire household would be summarily cut off from the web. This flies in the face of justice as we know it, both in the process of establishing guilt and the principle of reasonable punishment. This treaty also includes a DMCA-style takedown notice provision, which has been an unmitigated disaster in every country it’s been tried. But Obama and the other supporters of this treaty want to make this a global law.

It’s another example of people who have no clue about the ramifications of what they are doing making laws about things they do not understand – or at least I hope it is, because if it is not, then the Obama administration and any other supporters of the treaty are openly declaring that they have no respect for the American values of justice or law, much less the Constitution. Unfortunately, it’s becoming less and less of a stretch to believe the latter case is true.

On a happier note, Ubuntu 9.10 is out and seems to be doing mostly okay. It has gotten a slightly better overall reaction than 9.04 did, and I anticipate that when the first wave of bugfixes come out it will be a really solid distro. What is really important, however, is that this means Crunchbang 9.10 will be out soon. And that, my friends, is worth celebrating. Go ahead, have a drink. Pretend it’s on me. In the meantime, here’s my current #! desktop (click to biggify): 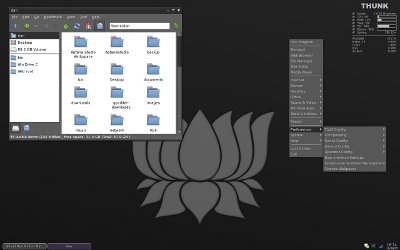 Lastly, I still want a Google Voice invite. Anyone able to hook me up?

So I received my invite to Google Wave one week ago, and have been playing with it off and on since then.  It’s a fascinating platform, not quite what I expected, and it’s been really interesting to think about potential applications and uses of the platform.

My initial impression upon logging in was that it was a typical Google app, visually very clean, colorful, and smooth. I had some idea of how things worked from watching their tech demo video, so I began to play around with creating and joining waves. For those of you who haven’t geeked out to this as much as I have yet, “waves” are the individual threads (documents?) that the platform is built to create and share. The wave can be just yours, which would make it functionally similar to an office document, or you can collaborate on it by inviting other users to join the wave, or by making it public. Once a wave has multiple users, the users can edit the wave itself, either by changing the “base” wave or by adding comments, discussion threads, links, or other media. These individual additions each have their own privacy settings as well, so if I wanted to comment on a wave but only wanted the original author of the wave to see my comment, I could do that. The wave itself remembers each of these edits and the order in which they happened, and so all waves are able to be “replayed” so that the user can see how the document has evolved to the state it is in now. END_OF_DOCUMENT_TOKEN_TO_BE_REPLACED

They want my soul, they can have it.

Google Chrome OS is an open source, lightweight operating system that will initially be targeted at netbooks. Later this year we will open-source its code, and netbooks running Google Chrome OS will be available for consumers in the second half of 2010…

Speed, simplicity and security are the key aspects of Google Chrome OS. We’re designing the OS to be fast and lightweight, to start up and get you onto the web in a few seconds. The user interface is minimal to stay out of your way, and most of the user experience takes place on the web. And as we did for the Google Chrome browser, we are going back to the basics and completely redesigning the underlying security architecture of the OS so that users don’t have to deal with viruses, malware and security updates. It should just work.