Been saying that all my life; it’s something I’m rather proud of. I like my state. I was born here and raised here and I’ve been all over the country, but this is my home.

If you’ve been living under a rock for the past week, the Arizona legislature just passed a law which Governor Brewer happily signed (an act that has given her a 16% bump in approval ratings!) that addresses the issue of illegal immigration, which is something that is a pressing concern in my home state. The law increases penalties for businesses that hire illegal immigrants and covers new ways in which the problem is to be addressed by law enforcement officers. Specifically, the intensely controversial part is this section:

For any lawful contact made by a law enforcement official or agency of this state or a county, city, town or other political subdivision of this state where reasonable suspicion exists that the person is an alien who is unlawfully present in the United States, a reasonable attempt shall be made, when practicable, to determine the immigration status of the person. The person’s immigration status shall be verified with the federal government pursuant to 8 United States Code section 1373(c).

First off, the lawful contact is clarified later in the bill as having to be an otherwise-justifiable encounter; there’s no “pulled over on suspicion of being illegal” clause here. If you ran a red light, and are pulled over, this is something that can be added on to that encounter with the LEO. In other words, the officer must have already legally detained you before this even comes in to play.

Now at that point, if you’re suspected of being here illegally, you need to be able to prove you aren’t. Now, there are any number of ways you could do this; a drivers license, a green card, social security card, passport, or any other number of simple documents easily meet this requirement. Note that the bill actually has the officer verify the status with the Federal Government if they cannot produce the paperwork on the spot, so simply not having the papers with you doesn’t violate the statute – although it might waste your time.

This is not an unreasonable requirement, and in fact it is much less demanding than the US Code, which since the 1940s has required that immigrants carry, at all times and on their person, documentation that they’re here legally. It’s nothing new, but people are either ignorant of the existing law, or simply ignoring it because the controversy is more to their liking.

As for the part of the requirement that initially made me uneasy, the phrase “reasonable suspicion,” it turns out that this is a very specific legal term, and that there is a wealth of case law providing guidelines for what reasonable suspicion is and is not. In short, what it means is that there are other factors and circumstances that cause the officer to believe something illegal is going on. For instance – and this will sound familiar to anyone who’s been south of Tucson – a police officer stops a van that had been speeding on the I-10 heading north toward Casa Grande. He arrives and finds the van is packed full of people, none with identification, and the driver is being evasive. Any reasonable officer here would suspect that these people may be here illegally, at which point this law requires him to check on their status with ICE.

What it does not mean is that the officer pulled over a brown person and demanded, “Papieren, bitte!”

This law is a good thing. It does not add extra demands on immigrants here legally, it cracks down on businesses who are exploiting legal loopholes to hire illegal labor, and it deters illegal immigration.

Though, of course, some people will just never get it. 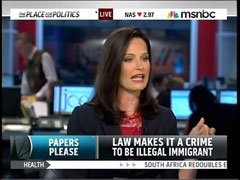